The Old Woman and the Sea 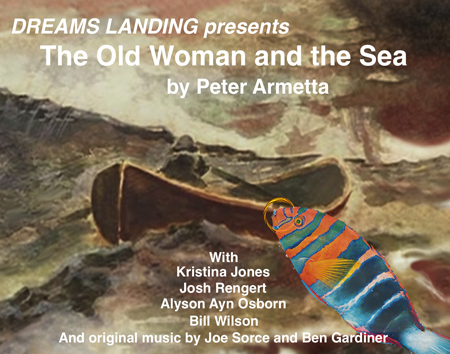 The Old Woman and the Sea

An old woman who is an outcast in a village where the fish have stopped running undertakes a mythic journey which renews her own soul and the life of her village.

Cast:
The Old Fisher Woman - Kristina Jones
The Boy, The Rainbow Fish, Villager One - Josh Rengert
The Girl, The Woman at the Bottom of the Sea, Villager Two - Alyson Ayn Osborn
The Husband, The Doctor from Beyond the Inland Mountains, Villager Three - Bill Wilson
Narrator - Peter Armetta

For other Dreams Landing audio dramas in the archive:

Reviewer: zuzubird - favoritefavoritefavoritefavoritefavorite - August 1, 2008
Subject: What You Don't Know Will Hurt You
A lovely tale that is both Aesop and Anderson, it illustrates that we don’t really know what death is, but that it isn’t necessarily a hopelessly closed door, however rudely it seems to have been slammed in your face. For those left behind—the living—there is the task of creating a new relationship with the deceased, which to me is very different from the usual view of having to face life without them. Years before the story starts, the old woman lost her husband and children to the sea, and since then has never been able to take up her grief and loss and make something new from it that she could endure. Stuck in a black place in which she chips away at herself, she seems to be a retrograde event horizon that eminates doom as she struggles through her capsized life. Enter the catalyst, wearing white, and his two chancy familiars. From this point forward, every creature or wraith that comes forward to show her the way is itself a mirror, a reflective, effervescent, or iridescent, full of air and water and light—or at least enlightens the old woman, as does the skull of her lost husband, who explains to her (not without some humor) why she is having such difficulty facing death. The old woman finally faces her own grief (the terrifying drain at the bottom of the sea), but once she forces herself to do this, she stops wondering aloud if she has already died, and begins to turn things around for herself.

For me it was fun and delightful to listen to, and going back into regular life from it was like shaking off a spell. The lessons and ideas are delivered in layers, and new ones keep coming to me long after.